A confession about rye bread and how I will redeem myself

An essential part of our current menu is the homemade rye bread that flanks our corned beef. Although I hate to admit it, until recently I never really liked rye bread. Before I continue this confession, I will make very clear that it is Lauren who is writing this post. I wouldn't want to taint Jon's reputation.

As a child (and actually even as a young adult) when the family went out for deli, I always asked for white bread with my corned beef. The whole family would look away, intensely embarrassed and pretend I wasn't related to them. They'd crack jokes and the waitress would look personally offended while telling me they don't carry white bread, but could probably make a sandwich with challah. That worked for me and I'd eat my warm corned beef with mayo on challah. (Yes I said mayo-- but I won't digress.) 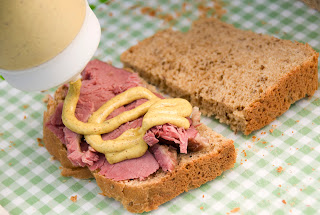 Photo by Nina Lao
But rest assure I would never ever subject anyone to my horrific preferences. So of course you will not find any white bread or mayo at Pearl's Kitchen cart. What you will find is some fresh baked rye bread filled with lots of caraway seeds and a fabulous mustard slurry.

Which leads to my latest challenge- baking rye bread to redeem myself from the sins of my youth. Currently I use a bread maker to bake the bread we sell. It has been turning out delicious, but I do aspire to make rye bread the more traditional way, using a sour dough starter rather than yeast. A sour dough starter is just flour and water which you "feed" daily with more flour and water. This mixture ferments and through a chemical reaction becomes the substance which makes the dough rise. Each time you make bread in this way, you use a portion of your starter and save some. Then you feed the original more and so on. This can go on for many years. The Boudin Bakery in San Francisco calls their starter the "mother dough" and has been using it since 1849! 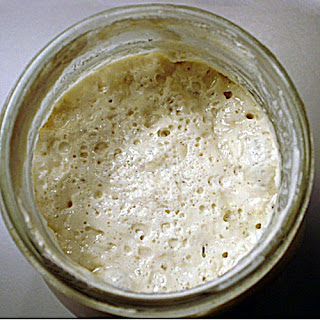 So I met this guy named Danny who recently started an organization named Sour Flour, which aims to "build a community through bread." I tend to like people who have lofty goals they aim to achieve through food. And ya know what, he's really doing it. I spoke to him for a bit at a recent street food vendor party we attended, and a week later I was in his house with two other people learning how to make baguettes! For free I may add. I had considered taking a very expensive course at a well respected baking school, but will now be able to put that off and learn from Danny. 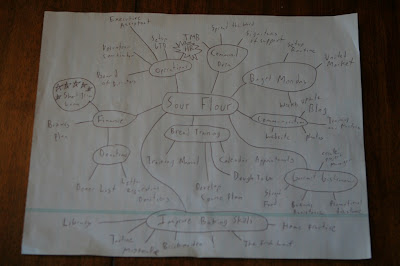 What I learned in my first bread making class:
Joking aside, I really did learn a lot, helped make 13 baguettes, met some cool people, and plan to continue my training. There is a lot of science and math which can be modified like crazy to make the perfect loaf.  I'm just going to start by just adding some water to some flour and hope to see the little bubbles that tell me the chemical reaction which I don't understand is working. Then I'll call Danny and ask him what to do next.
Posted by Pearl's Kitchen at 8:32 AM